Playhouse Square draws more than 1 million people annually to its 11 performance spaces while contributing in excess of $43 million in local economic impact every year exclusively from its performing arts activity (according to a Cleveland State University 2004 study). 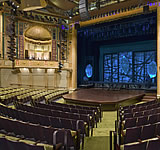 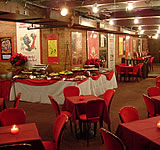 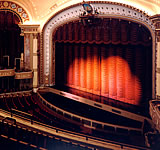 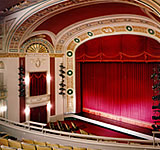 Purpose: Multi-purpose Black-Box Theater/TV Studio built as part of the Idea Center in 2005.

The grand old theaters that closed became subject to neglect and vandalism. No one foresaw their renovation and reopening, especially when suburban cinemas consigned downtown movie palaces to the ash heap. But gradually, a bold plan evolved to rescue the four shuttered theaters and meld them into a fine arts and entertainment center.

Bolstered by such artistic successes, the preservationists continued to: stave off demolition, assemble a professional management team and raise $40 million in a spirit of public/private partnership (with half the funds coming from each sector).

Restoration began in earnest, and culminated with the July 1982 reopening of the Mimi Ohio Theatre. By the end of the 1980s, the curtain had risen again in both the KeyBank State and Connor Palace. The Allen remained on the endangered list until 1993, when “Playhouse Square Foundation,” the nonprofit organization that operated the center, rented the theater with an agreement to purchase it. The purchase was consummated in 1997, and the restored Allen reopened in October, 1998 with a weekend-long celebration. In 1999, an investment group led by Playhouse Square agreed to acquire the historic Hanna Building, a move that brought control of the Hanna Theatre as well as significant street-level retail opportunities.