The World Was Wide Enough

THE WORLD WAS WIDE ENOUGH
A breakdown of the infamous duel between Alexander Hamilton and Aaron Burr, the events that led up to it and the theories of possible motives which have since been pondered by historians.

1. WE ROWED ACROSS THE HUDSON AT DAWN
On the morning of July 11, 1804 both Hamilton and Burr traveled separately from New York City to a popular dueling spot in Weehawken, New Jersey. Although outlawed in New Jersey as well, the penalties for duelists were not as harsh as those in New York.

2. WILLIAM P. VAN NESS SIGNED ON
William P. Van Ness and Nathaniel Pendelton, both United States District Judges served as the “second” for Aaron Burr and Alexander Hamilton, respectively. In the aftermath they issued a joint-statement regarding the proceedings with conflicting accounts of who fired first.

3. POISONED BY POLITICAL PURSUITS
The pent-up decades-long animosity between the two men came to a head in 1804 when Burr was running for the New York State governorship. During Burr’s campaign, Hamilton used the press to repeatedly attack Burr’s character. A letter published by fellow politician Charles Cooper which referenced Hamilton’s criticisms of Burr, was the spark that set off the chain of letters between Burr and Hamilton. 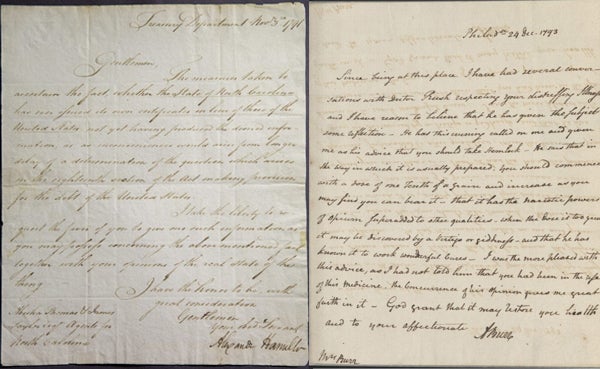 4. HAMILTON DREW FIRST POSITION
The draw for position was won and chosen by his second, Nathaniel Pendelton. However, some historians believe that since Hamilton was challenged, he had automatic rights to choose position and selected it himself.

5. NEAR THE SAME SPOT
This was the same dueling location used by Philip Hamilton and George Eacker less than three years earlier in which Philip was fatally wounded defending his father’s honor.

6. METHODICALLY FIDDLED WITH THE TRIGGER
The Wogdon & Barton pistols used in the duel were owned by John Barker Church, Hamilton’s brother-in-law and husband of Angelica Schuyler. They were also likely the same pistols used in the Eacker-Hamilton duel. 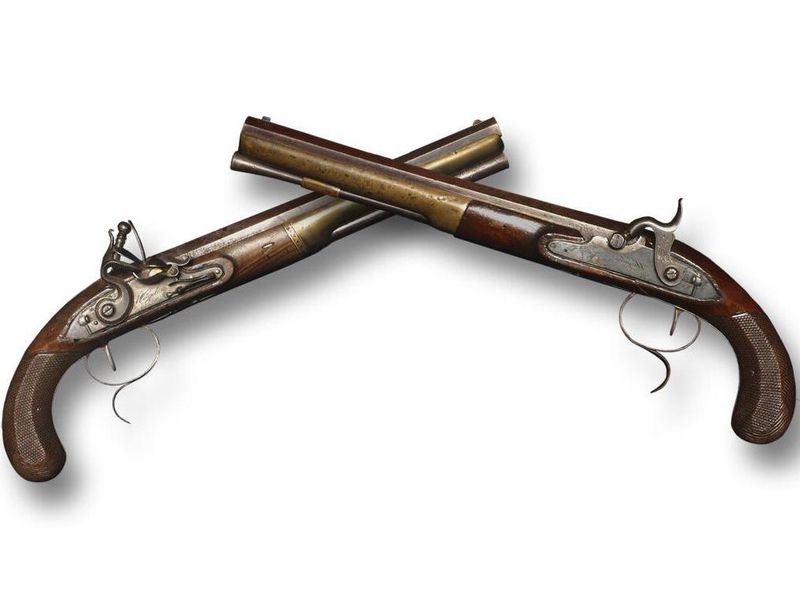 7. TERRIBLE SHOT
Burr’s aim was good enough to deliver a fatal blow, striking Hamilton in the lower abdomen with the bullet eventually lodging in his vertebrae.

8. WEARING HIS GLASSES
While it’s unknown what Hamilton’s true intentions were, first-hand accounts suggest Hamilton employed tactics such as pausing proceedings to adjust his spectacles and repeatedly sighting his pistol in an effort to provoke Burr.

9. AIM NO HIGHER
Hamilton’s shot stuck a tree branch about 12 feet above Burr’s head. It’s unknown whether Hamilton intentionally “threw away his shot” hoping Burr would do the same to maintain the “sanctity” of the duel, or his weapon discharging was simply an involuntary reaction to being hit.

10. NUMBER TEN PACES! FIRE!
Some theories suggest Hamilton intentionally baited Burr into firing, knowing it would be devastating to his political aspirations. A more common practice at the time to end a duel peacefully was firing your weapon into the ground. If the account of Hamilton intentionally firing over Burr’s head is true, this could have been perceived by Burr as an act of aggression. Hamilton penned a letter prior to the duel outlining his intentions to intentionally miss. Tickling the fancy of conspiracy theorists, some believe this was all a ploy by Hamilton to enhance his own legacy and completely destroy Burr’s.

11. BOTH AT HIS SIDE WHEN HE DIED
Hamilton lived for 31 hours after being shot. He was taken to the home of close friend William Bayard, Jr. where he received final visits from family and friends and was tended to by the same surgeon as his son.

12. THE VILLAIN IN YOUR HISTORY
Following the duel, Burr was charged with murder in both New York and New Jersey, but never faced trial. He completed his term as Thomas Jefferson’s Vice President but was later indicted by Jefferson on charges of treason in 1807 in which he was later acquitted.

13. THE WORLD WAS WIDE ENOUGH
The line “The world was wide enough for both Hamilton and me” is a paraphrased quote from Burr later in his life after reading Laurence Sterne’s novel “Tristram Shandy” in which a character catches an irritating fly, but decides to let it live concluding, “This world is surely wide enough for thee and me.”