Shakespeare in the Summer

At this year’s annual Broadway Summer Camp, Playhouse Square Vice President of Community Engagement & Education Daniel Hahn brushed off his teaching artist hat to coach some campers through their Shakespearean monologues. Here he tells us how that went:

What’s the first thing you think of when you hear the name “Shakespeare”? Confusing? Old fashioned? Pumpkin pants? Well, if you had the opportunity to see any of the amazing students I had the opportunity to coach at Playhouse Square’s Broadway Summer Camp, you might instead think “amazing,” “exciting,” or even “enthralling.”

Every summer for the past 15 years, Playhouse Square has offered high school students the opportunity to participate in our Broadway Summer Camp. Participants work alongside professional artists from the current KeyBank Broadway Series musical, as well as respected local teaching artists.

This year, we offered an introductory Shakespeare class during camp, and students worked with Playhouse Square master teaching artists Melissa Crum and Eric Perusek. The session began in total silence, as Eric and Melissa performed the intense murder sequence from Macbeth. Students gave them a rousing ovation at the scene’s conclusion, then discussed what they saw, and how exciting Shakespeare still can be when performed effectively. Then everyone worked on annunciation, playing with the simple vowel “O,” and creating complete improvised scenarios using only that one syllable. It was thrilling to see these young people’s imaginations ignite around a single letter, as some moaned mournfully, others howled playfully, and each one created a unique scene.

The class then explored Shakespearean meter, the classic iambic pentameter poetry, which serves as the heartbeat of the text. Lastly, and where I got to join the fun, students were asked if anyone had a memorized monologue, and those students worked with Melissa and I privately while the rest of the class did more group activities. Over the two classes, we worked with six students, exploring such classics as A Midsummer Night’s Dream and Hamlet, but I want to share briefly about the student who performed a monologue from Two Gentlemen of Verona. 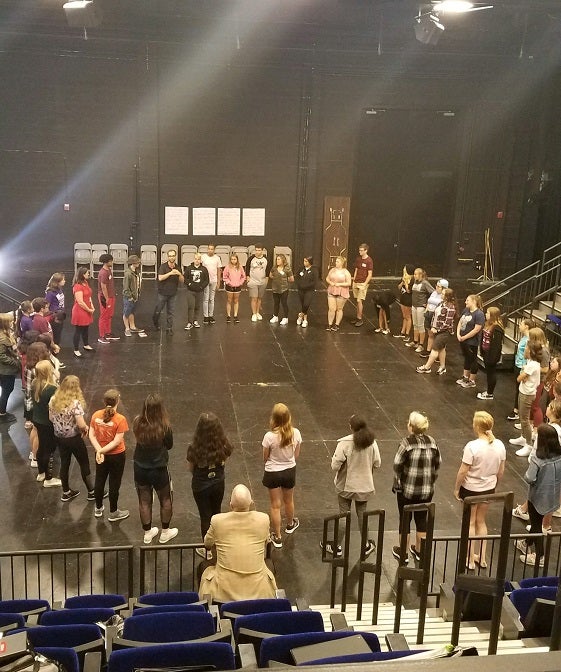 Julia’s famous “O hateful hands” speech from that early Shakespearean comedy is when she tears up a letter from her beloved Proteus in order to convince her waiting-woman Lucetta that she cares not for him. But once Julia is alone, she immediately regrets the decision and has a terrific comedic speech where she’s talking to herself and the tattered letter.

Our student actress was fully committed to the comedy of the scene, and at times was jumping up and down on the torn letter, kissing pieces of it, holding it close, bringing the text of Two Gentlemen of Verona brilliantly to life in this tiny side room in the corner of a Cleveland theater. Melissa and I were overjoyed with her exuberance. At one point, Julia sees her own name written in a piece of the torn letter, and hating herself for ripping the love note, she takes her own name and says, “I throw thy name against the bruising stones.” Our actress crinkled up the paper and threw it mightily on the ground. But here I offered a directorial suggestion.

What if, I said, “instead of rolling the paper up into a ball, you took the unrolled piece and threw it – try that.” She did, and the result was wonderfully comedic. Picture the frustrated Julia throwing a flat scrap of paper, hoping it will dash against the ground, but instead, it softly floats downward. Watching her watch the slow fall of the paper, with all of her comedic instincts, was truly hysterical, and made the speech even funnier than it had been.

I find it so inspiring when students take artistic chances, throw themselves into their craft, bringing classic texts to life, and it was so thrilling for Melissa and I to have the opportunity to see these centuries old texts brimming with life with today’s young artists. “Once more unto the breach, dear friends, once more!”