Creative Careers in the Performing Arts

If someone asked you to describe a few jobs in the performing arts, your mind may jump to some obvious choices. An actor, director, choreographer - just to name a few. But the performing arts world has so many other opportunities beyond the obvious ones that you may have never considered.

Think about your last visit to the theater. When you walked into the door you probably had to show a ticket to a volunteer. You then were given a program with info about the show and some other anecdotes about the venue. Then you made your way to your seat, and before the curtain went up you may have had a moment to observe the architecture of the space. The show started and you saw a story unfold, all complimented by different lighting effects, scene changes and music. 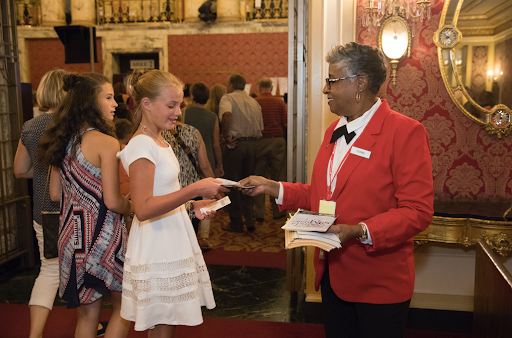 Yvonne (RedCoat Volunteer) assisting a guest arriving for a show.

Your experience at the theater was made possible thanks to a number of people who worked behind the scenes and in the spotlight. A ticket operations manager helped you to buy your ticket. A volunteer was trained by a house manager to ensure smooth entry to the venue. Your program was put together by a marketing team. The theater is upkept by housekeeping and maintenance staff. The show was performed by actors who worked with a creative team and production managers, with lighting cues and scene changes made possible by stage crew. The music was performed by a group of musicians led by a music director. These are all people whose unique skill sets allow them to be part of the performing arts in order for a show to happen.

If pursuing a career in the performing arts is something you are passionate about, there are so many opportunities waiting for you to explore that you may not have considered. This three-part blog series introduces you to some career possibilities in creative, administrative/arts management and production fields.

This post will focus on the creative team. These are the individuals you see on stage dancing and singing. They also can be described as the people behind the scenes designing the costumes, writing the lyrics or providing the direction for the actors to follow. Being on the creative team allows you to be part of the storytelling process from the beginning. Whether you are creating something from scratch or helping retell a classic, this area gives opportunity to use your creativity and imagination to bring something to life. Read our other posts about administrative careers in the performing arts and production careers in the performing arts. 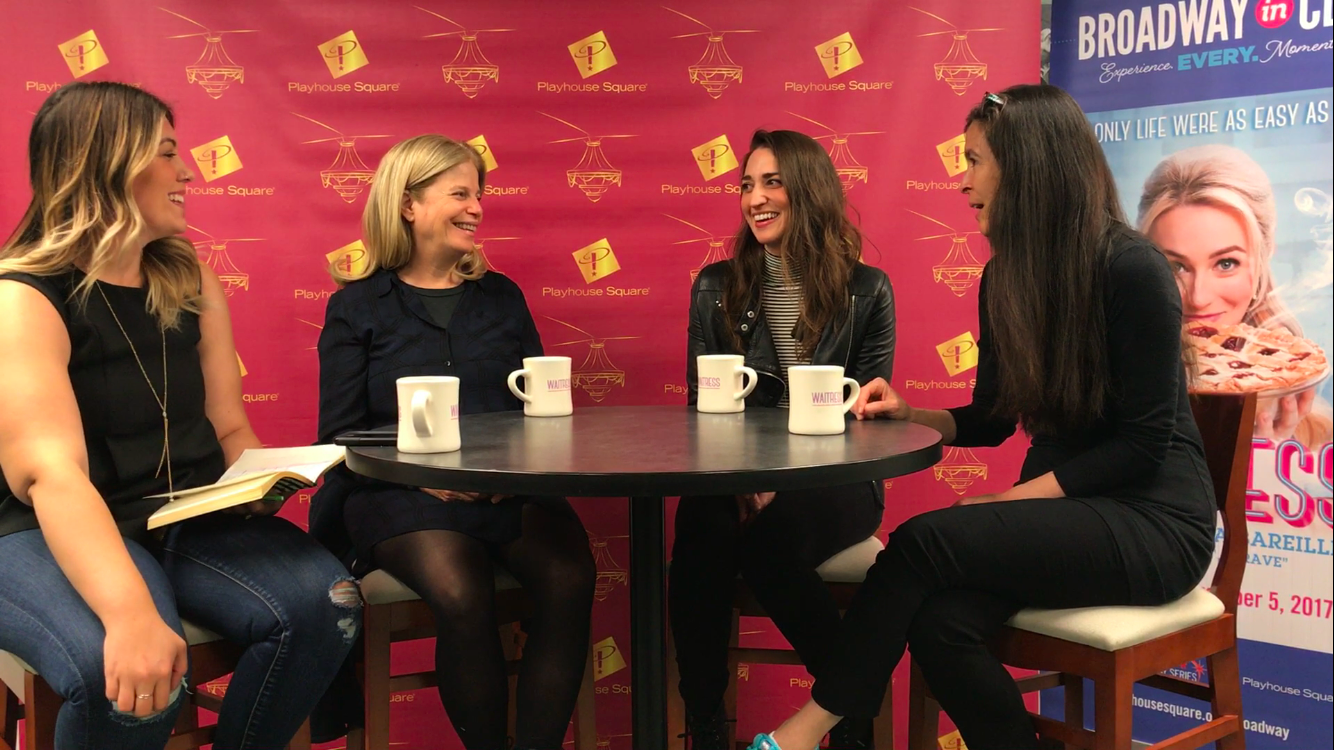 Actor – An actor is a performer on stage, in movies or on television, radio or podcasts. An “understudy” is a substitute actor who learns another actor’s role. The understudy will perform the learned role at short notice in the event the regular actor is ill, absent or has an  emergency. In musical theater, a” swing” is a performer who understudies multiple roles in the chorus or ensemble.

Artistic Director – The artistic director envisions and maintains a theater company’s mission statement by hiring creative staff (including directors, designers, and actors) to uphold that vision, and selecting works that fit the vision. The artistic director often leads fundraising efforts to ensure the company can continue producing theater to carry out its mission.

Choreographer – Choreographers create the dance numbers, or choreography (which can include stage combat/fight scenes), and teaches the routines to the performers.

Composer - A composer is responsible for writing the music that is paired with the lyrics of a show. Or, a composer may simply create music to help portray a mood or vibe without any lyrics, based on the cues a playwright provides.

Designer – A designer is a member of the creative team who works with the director to invent the visual world of the show. This team includes a costume designer, set designer, lighting designer, video designer and sound designer.

Director – The leader of a theater production is the “director,” who guides a company of actors and a creative team of designers to realize an overarching vision of the play's script on stage. 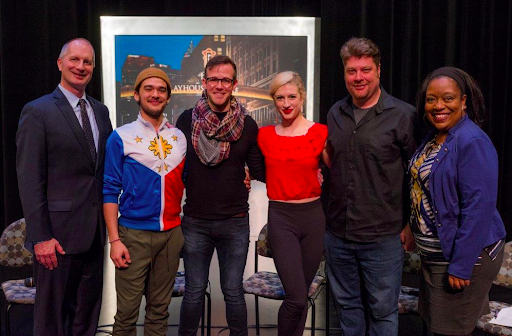 Make-up/Hair Artist – A make-up and hair artist works with the costume designer to create the look of the show’s characters.

Music Director – In a musical play, the music director teaches the company members how to sing the music.

Music Conductor – A music conductor leads the band or orchestra that accompanies a production. Sometimes this person is also the music director.

Musician – A musician plays an instrument in the band or orchestra.
Playwright – A playwright is a storyteller who writes the script of a play. For a musical, the script is called the “book.” In some cases, the book writer also writes the song lyrics, while the composer writes the music.

Playwright – A playwright is a storyteller who writes the script of a play. For a musical, the script is called the “book.” In some cases, the book writer also writes the song lyrics, while the composer writes the music. 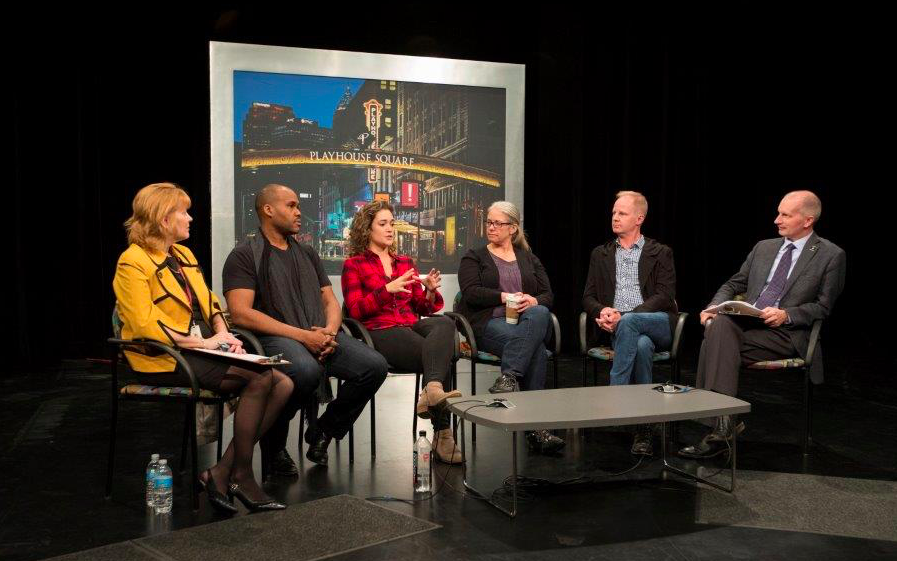 How Do I Get Involved?

After reading all the possible ways to be part of the arts, you might be wondering what you should do next? Below are a few programs at Playhouse Square that can help!

Launch - Artists, collectives, and companies can take residency at Playhouse Square through the Launch program.

Volunteer -  Being a volunteer is a great way to be involved with the arts without making a full-time commitment. Learn more about becoming a volunteer at Playhouse Square. 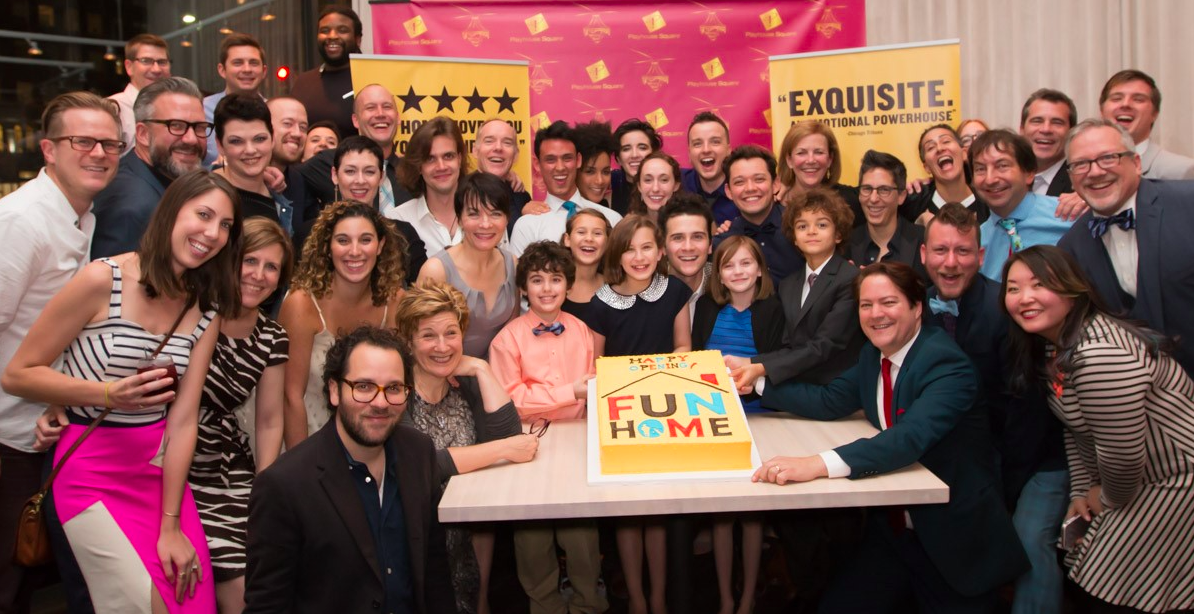 Cast, Crew, and Creative team of Fun Home celebrating the opening of their national tour at Playhouse Square.